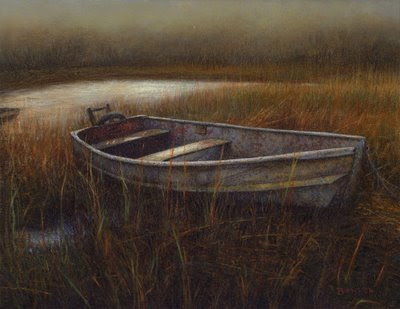 This painting was inspired by the small town legend of a man named Scotty and the cove that was named after him. The following story is true...but quite frankly I can't confirm it..but it's a good one anyway.
I grew up in the small sea side town of Winthrop, Massachusetts and in the 1990's I rented a small studio right across the street from the Atlantic ocean. My back yard butted against a small cove that overlooked the Boston skyline and the Winthrop, Yacht club. It was in this cove that I met one of my neighbors, a very funny sign painter named Rick. For a fee, he would carefully adhere the name of your boat on the stern with vinyl lettering. The day I met Rick he was shit-faced and telling filthy jokes. He handed me one of his business cards which included an itemized list of the services he provided: "Vinyl Lettering, Wood & Billboard Signs, Airbrush & Pinstriping | Auto, Truck, Boat, & Van, Banners, Auto Graphics, Wood Signs, Parquet floors and Belly Rolls". I didn't know what "Belly Rolls" were and when I asked him, he lifted his shirt and started rolling his belly. The guy was hilarious.
Because I lived on the cove I would see him from time to time, usually just a wave and sometimes a quick belly roll.

Rick was an alcoholic and he was going through a bitter divorce battle. It was soon followed by a bitter custody battle over his only son. He lost everything in the divorce, including custody of his son, Rick Jr. His drinking became worse and there were nights when the police had to break up domestic altercations on his ex-wife's lawn. A restraining order soon followed. His ex was so bitter over it all she threatened to legally change the name of their son Rick Jr. to spite his name-sake...eventually she actually went through with it. Her son's name was legally changed from Rick Jr. to Scotty. needless-to-say, Rick Sr. was pissed but there was nothing he could do in the courts, he no longer had custody. He had no say.

...Or did he?...Rick Sr. changed his name to Scotty too. Brilliant! His wife still lived on the cove with her son and to spite her he made it his mission to re-name the cove, "Scotty's Cove". To boat owners who were docked in the cove, he offered discounted vinyl lettering if they allowed him to add the words, "Scotty's Cove, Winthrop, Mass" on the stern. On the route 145 road signs that lead through Winthrop he added in small letters, "Scotty's Cove 1 mile". That's true. If you're ever in Winthrop on rt. 145, take a close look and you'll see the words..they're still there. Eventually boats all over town had "Scotty's Cove" written on them and it soon began to be known town-wide as Scotty's Cove. His Cou'de Gra came when "Scotty's Cove" found it's way on to an official Winthrop, Mass map.

Several years later, Scotty Sr. passed away in his lawn chair in his front yard on the 4th of July. Independence day.
Posted by Todd Bonita at 7:52 PM 7 comments: 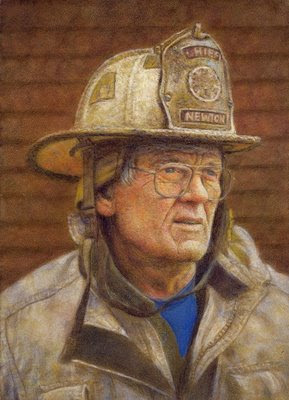 My Father-in-law passed away three days ago..I'm profoundly saddened, sick over it and simply still cannot believe it. He was a salt-of-the-earth goof-ball and I loved him and miss him already and can't believe I'll never see him again.

He had back pain just after the new year and an MRI revealed that he had a metastatic tumor that was spreading rapidly. My poor wife was the one who told him..how horrifying?! Less than eight weeks later he died in Exeter hospital surrounded by his family and friends. I just can't wrap my head around how quickly is all transpired..all of this.

1) In 1998 I bought an engagement ring and decided I was going to ask Alison Baker to marry me just after the new year..and in the tradition of courtship, I was going to ask her father David for permission to marry his daughter. At that time I worked as a chainsaw sculptor, carving bears and eagles on Cape Cod, it was a very cool job. My plan was to trade one of my carved bears for his daughter. David had a great sense of humor and was a woodsman and I knew he would appreciate it. I snuck the bear into his basement and the exchange went something like this:
Me (standing next to the bear trying not to laugh): In the tradition of the pioneers who traded skins, furs and pelts for the Indian chiefs daughters, I would like to trade you this fine wooden bear for one of your squaws.
David: which one?
Me: The medicine women (Alison was in medical school at the time)
David: I'll give you Kristen (Alison's twin sister)

2) David came to visit Alison and I when we lived in Philly and he was bragging about his artistic ability and how he was going to switch careers and become an artist. He wanted an honest critique of his art and showed me a stick figure drawing of a bird. I played along and gave a rave review and agreed that he should switch careers and hang up the fifty years he worked as a fire fighter and sell his tree service that he owned since 1967. We had a brief chuckle, he flew back to New Hampshire and I never gave any more thought to the stick bird. A few days later as I poured a bowl of cereal for myself a piece of paper with a stick bird drawing on it fell into my bowl. Dave tucked it in the box before he left..I phoned him, we had another chuckle, I thought it was over. The next day Alison was reading a book and a stick bird came out of one of the pages..another one was found wedged between the stacked dinner plates..another in my sock drawer, underwear drawer, several shirt and coat pockets, shoes, utensil drawer, cups, mugs, countless books, etc..we would find them weeks, months and even years later. The last was about two years ago wedged in the pages of another book. The later we would find them the funnier it became.."Oh my God, Alison, I found another stick bird, the man is nuts". He later revealed he thinks he made over a hundred of them and spent hours making them. I've never more looked forward to finding another one.


3) The day we moved back from Philly, David was so happy to have Alison home in new Hampshire again..he spent a large part of the summer mowing the words, "WELCOME HOME ALISON" in a grass field behind his house. It was about a football field long..not kidding. 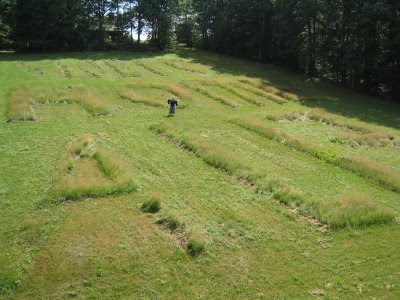 July, 2003: Alison standing in the middle of the "Welcome Home Alison" field. David had lifted me in his bucket truck to take this photo.

4) Blueberry picking in his secret spots...I had only picked blueberries on mountainsides prior and didn't realize his secret spot was chest deep in a blueberry bog..great fun though..we got gallons.

5) Target shooting competitions in Davids woods..the targets were bear bottles and he would sometimes call me asking to help him make targets. He was a better shot than I was and I suspected he would would sometimes dog it and lose on purpose to make me feel good..I didn't care, I just genuinely enjoyed his company and being with him. 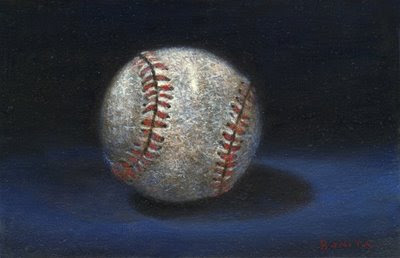 Pitchers and catchers have reported for duty in Florida so it won't be long before I'll be haggling with a scalper outside of the Cask n'Flagon for an obscenely expensive Red Sox ticket. I can't wait. This painting has had me in the spirit lately.

Someone had seen my miniature painting called "October" and commissioned this slightly larger (4x6") painting of the same ball for her husbands birthday. it prompted me to do a few more original baseball compositions which I'll be posting later this week.
This is "Baseball #5" (4x6") Oil on wood panel.
Posted by Todd Bonita at 10:51 AM No comments: