Makin' for the Bay 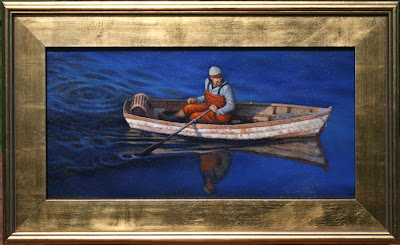 This is one of the pieces that I did for the show at the Diamond Newman Gallery in Boston. "Makin for the Bay" is an oil on canvas, 10x20". I like the odd size of this work. I also learned that I prefer working on wood panels rather than canvas. Actually, I know I should give some tighter weave canvases another try before I make this declaration.

The painting is a lobsterman rowing toward the bay. A theme I've painted before and will continue to do until the images stop haunting me. I came up with the title from rewording a line from the Steven Stills (Crosby, Stills, Nash) song, Southern Cross; "She was making for the trades on the outside and the downhill run to papeete"...I love the nautical imagery in that song and thought part of that line would be cool if I simply reworded it to fit the fella in my oil painting who was "Makin' for the Bay". The love is in that gritty slang "Makin". It's exactly how this lobsterman would phrase it.
Posted by Todd Bonita at 11:59 AM

Todd, Congratulations on your new relationship with the gallery! I love the texture of the boat and the movement in the water in this painting. beautiful! Holly

Thanks Holly, nice of you to say.