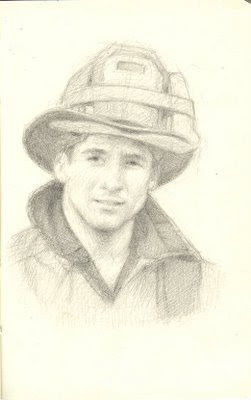 This is a drawing from my sketchbook of Robert J. Foti. It's my way of taking some time to draw and reflect on the faces of the people who lost there lives on 9/11. Robert Foti was a firefighter with Ladder 7 and responded to the World Trade center on September 11, 2001. He perished in the collapse of the south tower, his remains have never been found. I didn't know him but have been reading some heart felt words about him from people who loved him dearly. I read that when Robert was 12 years old he saved a boy from drowning on Lake Hopatcong. It seems he was destined to devote his life to serving and helping others. He served so bravely and gave the ultimate sacrifice on 9/11. Robert J. Foti is in my thoughts today.
Posted by Todd Bonita at 4:27 AM

More and more we live in a world where one of the major problems is indifference (I think that ignorance is the major one).
Robert, fortunately like many others, was a person who cared about others.
Lets hope that people start changing the way they see others and thinking about the world as one.
Keep up with your excellent work.

Todd - what a wonderful thing you did here -