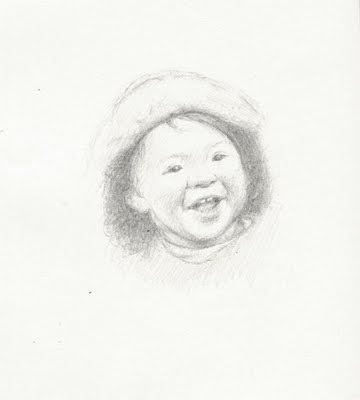 This is a small sketch I did of a two-and-a-half year old girl named Christine Hanson who perished aboard United Airlines flight 175 as it slammed into the Trade Centers south tower on September 11, 2001. She was from Groton, Massachusetts and at two-and-a-half she was the youngest of the 2,973 victims. Christine was traveling with her father Peter Hanson and mother Sue Hanson, they were on the way to California for a trip to Disneyland and to see relatives.

I didn't know Christine or her family but they will be in my thoughts and prayers today.
Posted by Todd Bonita at 6:31 PM

What a beautiful picture of a beautiful little girl. Thank you for sharing it with us. I live in the town of Groton, Ma where the Hanson's lived. We will never forget.

A wonderful tribute to a sweet life cut short. Thank you