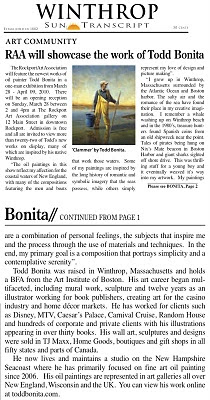 Maaaa...check it out, I'm on the front page of the Transcript!
I live on the New Hampshire sea coast but I grew up in the small Boston suburb of Winthrop, Massachusetts. The local newspaper; The Winthrop Transcript, was kind enough to print an article about my upcoming show at the Rockport Art Association. My mother still lives in Winthrop and she really bought ten copies. Thank you Winthrop Transcript...I thought that was very cool. I still know a lot of people from my old hometown and I've received word that some people who read the article will be coming to the show. Awesome! I look forward to seeing you. This is all a great way to post another reminder for my art exhibition next week:

Hope to see you there.
Posted by Todd Bonita at 5:56 PM

Great stuff Todd. I had a similar experience this week too when I was contacted by an editor of a small online magazine here in Ireland. I think I sent you the link. Check it out. These things are always good publicity before our exhibitions. Mine is on the 27th May. Wishing you could be there..

Thanks April, good to hear from you...I checked out your listing and I must say, very nice press! Good for you. I liked the picture of you in front of one of your larger paintings...it's good to see the scale I think. The big ones have an impact to them. Your work is looking as strong as ever. Good luck with your exhibition too April. Fingers crossed for the both of us.

Ooooh that was an OLD picture...back in the Guinness days...see how it turned my hair red! LOL. ;-)
I am working on another of the same size Todd and attempting a marathon with it. To complete it in just a month as opposed to four! The big ones do make an impact: I was very blessed to be invited along to the housewarming party at the boathouse of the lady who bought that painting and it was breathtaking to see it on the wall. The stones just seemed to sing out of the canvas! It's weird but some paintings are just magical. I'm sure there are some paintings you've painted that are 'poetry'. Anyway. I'd better not take up all the space here.. thanks and good luck.
;)