Today was the first of a three day plein air painting work shop with legendary landscape artist Don Demers. I plan on posting extensively about the entire experience and sharing my notes and images here on this blog. Sitting here with my laptop I'm realizing that there is so much information and I have so many images and notes to share after day one, that I am going to space out the information over the course of the week. He did two demos today, each with a different technique and goal. I'm going to post about the first one today.

In the morning we met at the Creative Arts center in Chatham. There were 14 painters, including myself. Most were from the Cape and after painting and chatting with them, found that all were very capable and some were professional with gallery representation. Most had already studied with Don before..this was my frist time meeting him. He's a really nice guy and I'm not just saying that. He's very down to earth, smart, witty and very passionate about making art. After a brief synopsis of what to expect for the day we all met at Round Cove landing in Harwitch. (click on any of the images to see them larger). 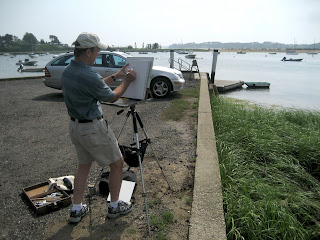 Don set up for his demo using an Open box M plein air set up mounted on a camera tripod. It was mostly sunny with high humidity and heat expected to reach 90 degrees Fahrenheit with strong winds. Not perfect but far better than rain. Here are my notes: (I will expand them as best I can but forgive me, it's very late and I need to rest to do it all again tomorrow). Dons plan for this first demo was to help us clarify our thoughts and simplify the subject matter before us on canvas. He started with a thumbnail sketch of the composition using a soft pencil on paper. 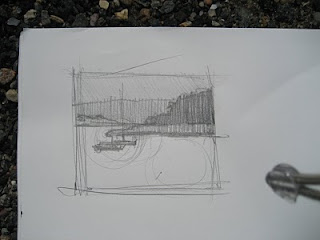 His thumbnail sketch, shown above, was only a few inches but proportionate to the size and shape of his canvas. He squints his eyes to better understand the value structure of the composition and then assigns those values in his thumbnail drawing. He's not interested in detail at this point. he's looking for abstract shapes and organizing them in an artistic manner. He's not seeing boats, he's seeing abstract shapes. He's not staying exactly true to whats before him, rather, he may make a shape larger or smaller, longer or shorter...whatever he feels would make the composition serve or support his initial intent. This thumbnail drawing will serve as reference and he will stay true to it as the painting progresses and the sun and shadows move and change. 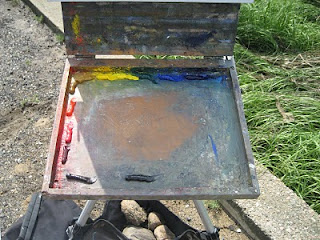 Dons palette is made up of various oil painting brands, he's not committed to any one specifically but said he was getting rid of his Rembrandts. He likes Utrecht. He talked about historical palettes of former artist and stressed not to get to caught up in all of that, palettes are no big deal. Keep them simple, at least two reds, two yellows and two blues. Don changes his palette with his paintings but mostly lives in the neutrals. His palette today was pretty typical for him. From lower left to right, going clockwise:
Alizeran Crimson, Cad Red medium, Cad Orange, Yellow Ochre, Cad Yellow light, Cad Yellow Medium, Viridian, Cobalt blue, Ultramarine Blue...those two earth colored worms at the bottom are Raw Sienna and his favorite Greenish Umber...He swore greenish umber will get landscape painters out of a lot of binds. No white yet! 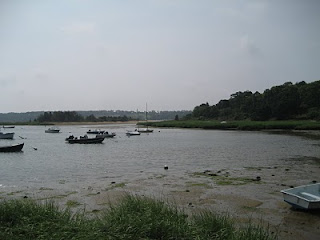 Here was the scene before Don. He noted that he was attracted to it for it's close value range and smokey air atmosphere. He said that subjects with close value ranges are more moody and have more feeling. 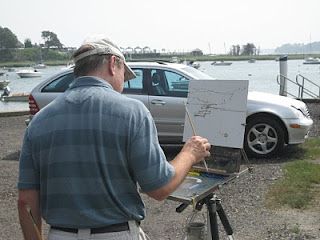 He began by mixing a dark color and added liquin...Liquin is a quick-dry alkyd based medium. He then began drawing the shapes with a small bristle brush, taking care to stay true to his thumbnail and nature before him. For this demo he is working on the white of the canvas (No wash) he's using linen mounted on birch panel. While working, he quoted artist and recommended books. He recommended a Dover publications book titled "Composition" and quoted from it, "Don't seek beautiful objects to paint, instill beauty in the everyday arrangements"....or something like that. Is it too late to say that I am personally responsible for everything that I write here about Don Demers. If I misquote or misrepresent what he communicated in any way, I defer to baking in the sun all day. 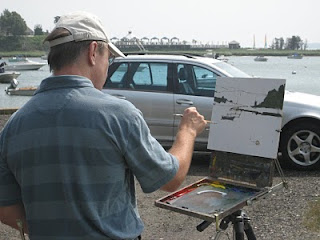 When the painted drawing on the canvas was done, he switched to a larger brush and began washing in some of the dark shapes, again, staying true to the values he already established in the thumbnail drawing and trying to interlock pieces of the dark puzzle. He said that in art school, they told him to use the biggest brush to get the job done, but Don disagreed to the extent that it makes more sense to use the right brush for the job at hand. "I understand the concept of breadth with a large brush but it can lead to sloppiness...instead, use the right brush." He recommends using a variety of brushes; flats, rounds and his favorite and most versatile, the filbert brush. He was using bristle brushes but will also use synthetics to soften edges later if needed. He wants to cut down on his brush collection. He shared his thoughts as the painting developed: Areas of inactivity should be complimented by areas of activity. He cleaned his brushes with Gamsol (an odorless turpentine substitute) 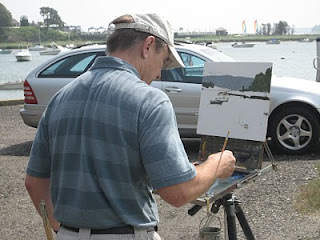 Here he has quickly laid in the background foliage and simplified it as a color shape. This was key for me to see personally...I would have tended to fill that background landscape mass with more detail, darks and lights. Don laid it on, pow! He then had to make a critical decision about the sky and water color and value. They were similar but one had to be definitively different from the other in color and value...He made the sky darker. 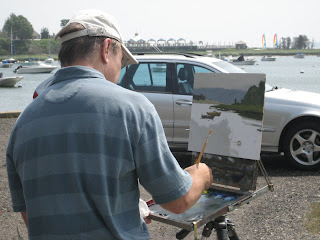 As Don filled in the water, he switched to a bigger brush because he had more space to fill. He's trying to build connections with his color, making it warmer or cooler as needed. He prefers to work from the neutrals outwardly and noted that paintings can live in the neutral zone for almost the entire painting and then in the last five minutes can pop and come to life with the addition of chromatic colors or whatever color is necessary to do so. Again he mentioned the inherent moody feeling you get from using neutrals and similar value ranges. He compared it to the evocative and emotional response you get from black and white photography. He deliberately opted not to begin this with a transparent wash under painting because the smokey and moody atmosphere is better expressed with rich color. Don used a viewfinder to isolate and focus on a color relationship between the sky and where it met the distant landscape. As the painting progressed, the tide and landscape changed, this is where a landscape painter must stay committed to the original thumbnail or they will be chasing their tail. 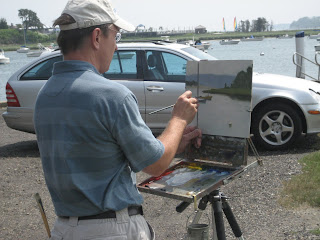 This was a cool tool...a small metal rod that Don bent the end on and uses to help him paint straight lines. 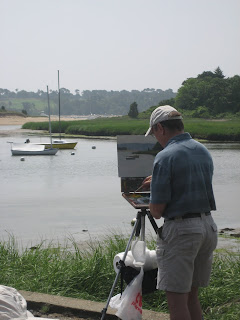 "I'm not a formulaic painter...I'm more reactive to the subject, thats where the truth is".
Don started laying in thicker paint, gliding it across the canvas using the side of the brush sometimes. He went back into the tree shapes on the right and used a darker and cooler color, pushing, touching and dragging color. Using a very light color and a small brush he added small notes to the background looking to add to the spirit of the piece..small punctuations...this is where the art is...even thought he's a realist, he's thinking in abstract terms...looking, thinking, feeling, selecting....Artistic selection of the landscape. 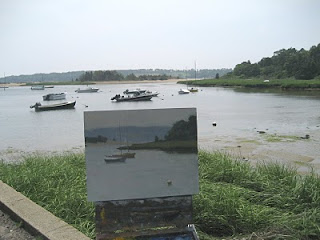 Here is the finished painting. Click on it to see it larger...he added that mooring ball on the lower right and saw it as oriental in it's concept....a small, quiet shape surrounded by all this shape...it was almost like a musical sound..bing! He started the painting at 9:45am and finished an hour and twenty minutes later at 11:05. He asked us to find a spot and do an exercise-not a painting-but an exercise to find structure, organize our thoughts and image. I'll post my exercise manana.
Posted by Todd Bonita at 8:25 PM

Very interesting! looking forward to more. So what brand is that greenish umber????

Hi Deb,
It's really wonderful...hot...but wonderful. The greenish umber was Rembrandt and he swore that when he uses his exhisting stash, he's done with Rembrandt.

Very cool. I love it when artists use things like that metal rod with the bent tip. Stape showed me a similar trick for achieving straight lines. Makes me think of what people always say when they're talking about their supposed inability to create art: "I can't draw a straight line." Ha! Who can!? It's liberating to realize that the Holy Ones are just as flawed as anyone, and that perhaps the "magic" of art has less to do with skill or "talent" (which is what, exactly?) than with the inner life and "vision" expressed by the creative spirit.