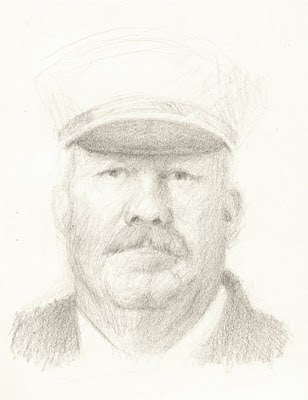 This is a sketch I did today of Lt. Raymond Murphy. He was a New York city firefighter and a hero who died while saving lives on 9/11/2001. I did not know him but thought it might be a respectful way to pay tribute to him today. Here is a link to a web sight that was set up by his family as a way to remember him. Raymond Murphy Rest in peace and thank you Raymond. 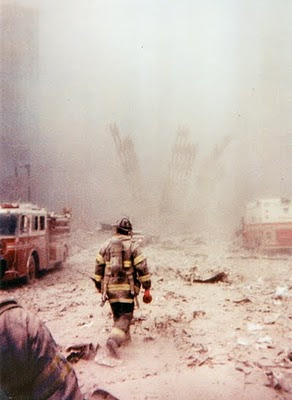 This photo epitomizes firefighters everywhere. It was taken September 11, 2001, after the collapse of the first tower and shortly before the collapse of the second tower. It shows Lt. Ray Murphy and Firefighter Rob Curatola of Ladder Co. 16 walking south on West Street towards the debris of the first collapse to resc ue survivors. They had just assisted in the removal of survivors, one of which was an injured Firefighter. Ray had instructed firefighter Rich Ratazzi, also of Ladder 16, to take the injured firefighter back to the ambulance staging area at Vescey and West Streets, and then to meet up again in the high-rise truck which is to Ray’s right in the photo. As Rich was leaving to care for the injured firefighter, he took a quick photo with a disposable camera many firefighters carry. Shortly after this photo was taken, a general evacuation of the area was called and Ray and Rob were caught in the destruction of the collapse of the North Tower. Rich did not realize until the next day that he had captured such a meaningful photo. Rob Curatola’s body was found on September 12, he had been married just (3) weeks. Ray’s body was returned to us on October 1, 2001. The photo which brings great solace to our family, shows the professionalism, courage, and determination of firefighters everywhere, who have the ability to remain calm and focused in the midst of such chaos! May God Bless You All!

The Family of Lt. Ray Murphy
Posted by Todd Bonita at 7:28 PM